The 3D printing process begins with a 3D model of the object, usually created by computer-aided design (CAD) software. One of the widely used open-source CAD programs is OpenSCAD.

Here is an example of a simple 5 x 7 x 10 pyramid created using OpenSCAD. 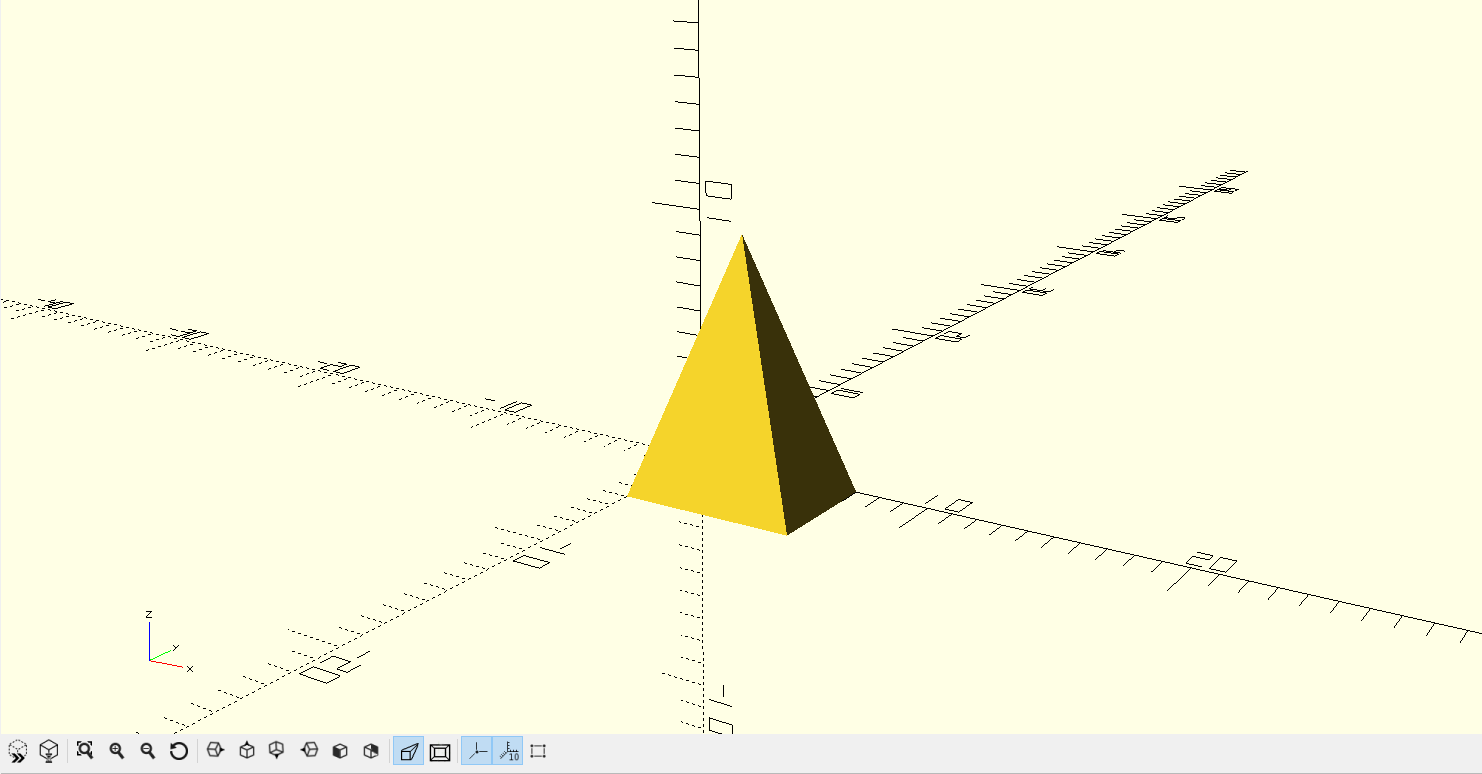 An STL (“StereoLithography”) file is a triangular representation of a 3-dimensional surface geometry. Developed in 1987 for 3D Systems, the STL format was designed as a standard format to allow data movement between CAD programs and stereolithography machines. The surface is tessellated or broken down logically into a series of small triangles (facets). Any shape can be used for tessellations, but STL format uses triangles. This triangular mesh is most often derived from the surface – and only the surface – of a 3D CAD designed object.

For a simple 3D object such as our pyramid, the entire surface can be covered with just 6 triangles; 4 for each side of the pyramid and 2 to cover the bottom rectangular base. 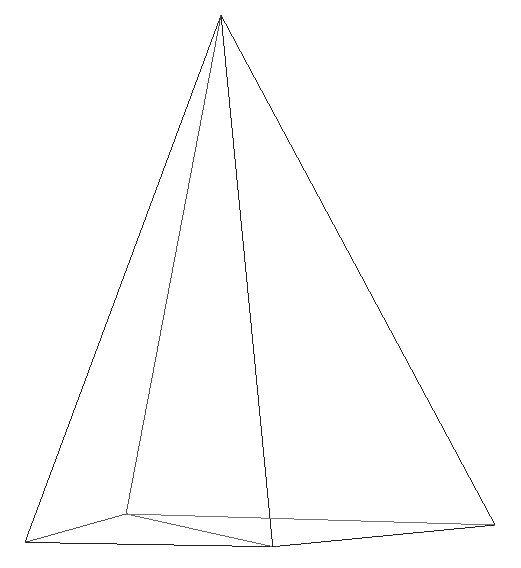 In an STL file, each and every triangle ‘facet’ is defined in terms of the coordinates of its three vertices. In addition a normal vector (a line perpendicular to the triangle and with a length of 1.0) is included so that the inside and outside of each facet are clear. Further, the vertices are listed in counterclockwise order when looking at the object from the outside (right-hand rule). 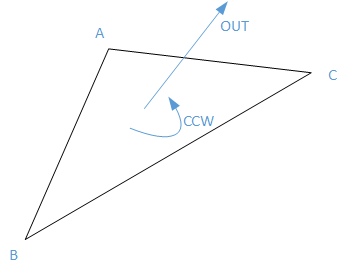 Also, Each triangle must share two vertices with each of its adjacent triangles (vertex-vertex rule). In other words, a vertex of one triangle cannot lie on the side of another. This ensures that there are no gaps/uncovered surfaces. 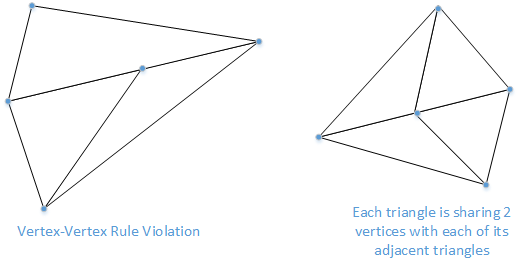 An STL file could be both in ASCII and binary format, but binary files are more common since they are more compact. To understand STL better, lets look at the ASCII stl file for our simple pyramid:

Here, each of the six triangles is represented by a facet. The file simply contains the normal vector and the 3 vertex coordinates for each triangle.

Modeling your shape is only the first step of 3D printing. You need to process the resulting STL with a slicer program that will cut your solid into thin slice and decide how to print them. To visualize the layers, here is our pyramid STL file sliced using Slic3r: 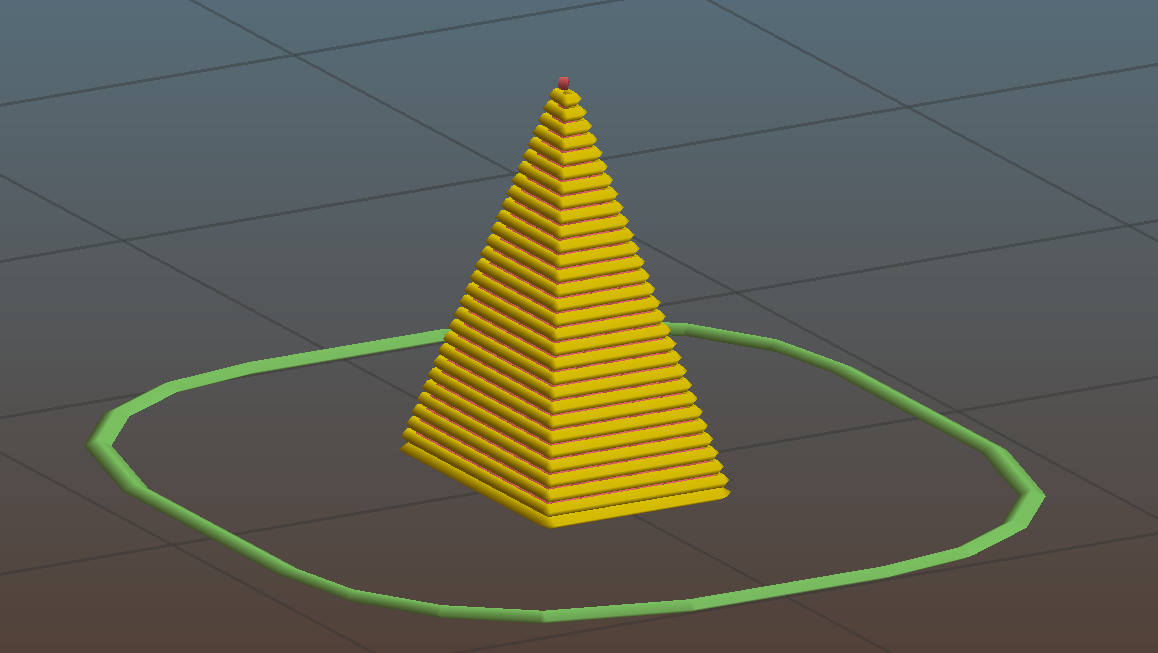 Lets look at how exactly this slicing happens: 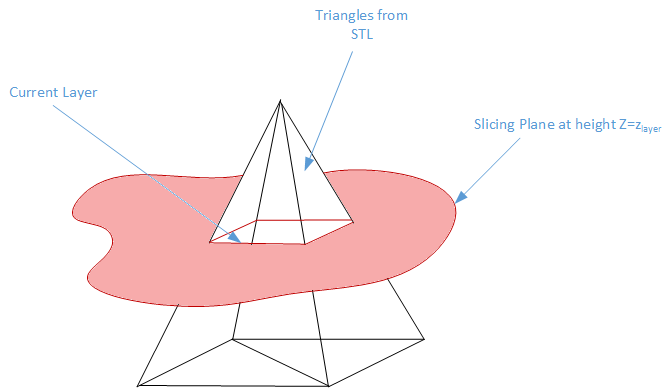 Each slicing plane can be considered as an infinite plane at a specific height Z. The slicing problem now boils down to finding the intersection of all the triangles in STL with that plane at height Z. We could use a brute force method and check if each triangle is intersecting the current plan. This is easy for our pyramid as it only has 6 triangles. This is obviously not optimal for more complicated objects with thousands of triangles. We have to weed out most of the candidates otherwise we’ll spend ages processing the file.

Determining triangles at each layer

There are many solutions to the optimization problem. Here is a simple algorithm that was (probably) used during the early days of slic3r: 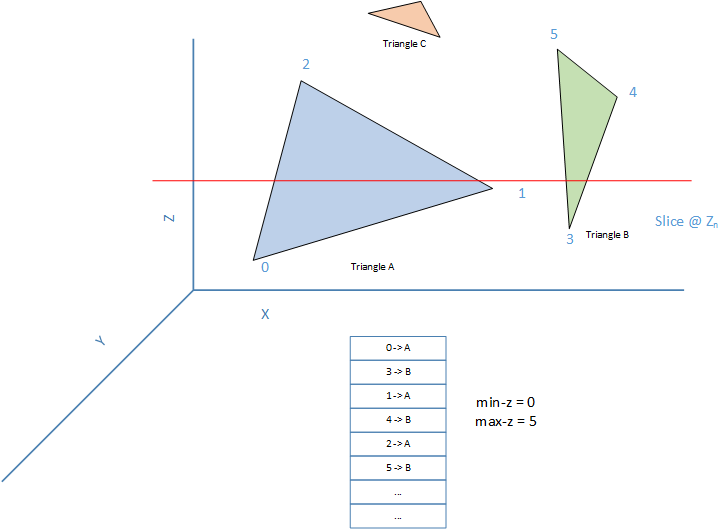 Here is the pseudocode for slicing:

Triangle intersection with a plane

To calculate the intersection points, we first need to know which edges of the triangle intersect the slicing plane. Consider the triangle show below. 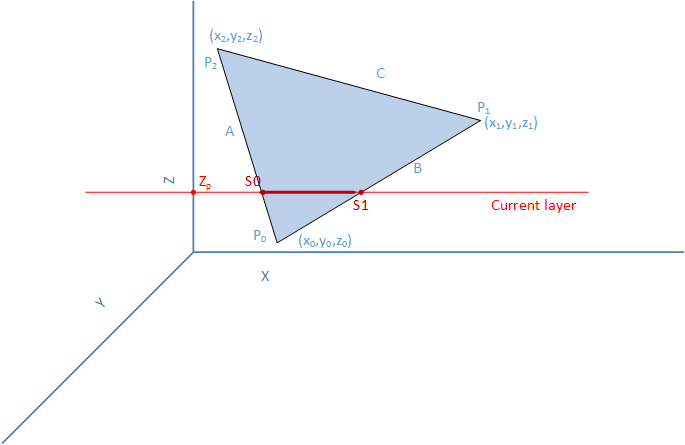 If the vertices of the triangle are sorted by their z height, the intersection points can be easily calculated.

With the edges determines, calculating the segment vertices S0 & S1 is a trivial projection of a triangle on a plane. For example, with edge A, any point on the line can be represented as a linear interpolation between P0-P2. Hence,

For an object to be printed, the printer needs to make a continues movement to get the best and fast prints. What we have so far is a list of segments at each layer. Printing these segments as is will make the printer head skip/travel from segment to segment in a random order. We need to convert this random set of segments into a closed/open polygon by connecting them together. We can do this by sorting/connecting the segments so that neighboring segments are printed in order. Here is a simple algorithm for this:

Generating Gcodes is now just a matter of transforming each segment into a printer head movement with the right amount of extrusion of filament. Here is an example for layer 0: (Look at the comments for more explanation.)

Determining how much to extrude

How much filament to extrude depends on the filament diameter, nozzle diameter and distance to travel.